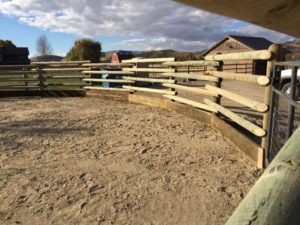 The true description of fencing used for ranching is a large utilitarian type of fencing that is capable of containing livestock. The important thing that separates fencing for ranches versus residential fencing is the fact that it serves a direct purpose unlike decorative fencing. It is a durable and sturdy fencing that will stand up to time, elements, and animals. It is important that your fencing contractor understands this difference and constructs your fencing accordingly.

The style of your particular fencing depends on the specific function of it. If it is to contain livestock it depends on the kind of livestock. Is it a large animal like a horse or a cow? Perhaps it is a smaller animal that could escape from the bottom of typical split rail fencing. Are you containing animals that are capable of jumping? All of these things need to be considered when designing your ranch fencing. A good contractor will understand all of these things and accommodate for them in their design.

A durable and sturdy fencing for your ranch can be constructed from different material. The sturdier your fence needs to be the fewer material options you will have. Typical fencing is constructed from split wood rails called split rail. It can be constructed using two, three, and even four rails between each post. Fencing can also be constructed from vinyl while some incorporate a metal wire fencing to contain smaller animals. There is also traditional barb fencing that has been used for years. Your contractor is also capable of creating a gate appropriate to the type of fencing used.

A good fencing company will create the right fencing for your needs and budget. Consult your contractor before building begins to ensure everyone is in agreement on building plans and budget.