Until last year I’d never cooked eggplant (aubergine to fellow Brits) and I love it, especially eggplant ‘Parmesan’ and in Indian curries. Having this blog makes me try new things with a view to growing them in my garden. Or sometimes I have the items in the garden and just need to try them, like radish greens last year. The other week I was researching how to cook collard greens and noticed that you can eat beet greens! Well when out in the garden and thinning the green tops on the beets I had to try that didn’t I? Thinning the beet tops I harvested 5oz of the greens, I washed them and grabbed a bunch (1oz), chopped them up, and threw them in a pan to saute. Mixed in some peas, and corn then served it as a side with Spaghetti. 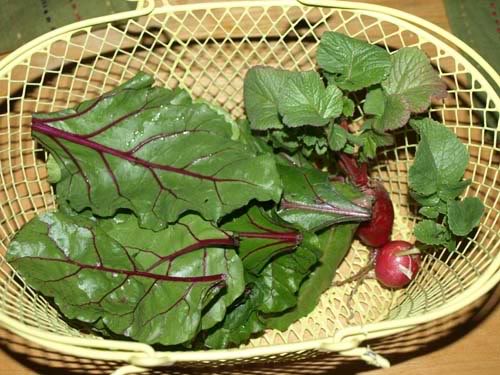 I have to say they are delicious. Also they take on the flavors of herbs/spices quite well! I’d read that some mixed greens can be bitter so I was wary of them, but now I could eat them every week! Much nicer than radish greens too. Plus I hear they are similar to Chard which is good as I have some of that growing too. Next I plan to use them instead of lettuce in a salad!